So I will be changing the name of the blog to Vancouver Animal Defense League.  VADL is a group I started years ago in Van and we have been very active with anti fur, foie gras and shark fin campaigns.  If you are a follower of this blog make sure you search for us under vancouveranimaldefenseleague.blogspot.com.  I have lot's coming up so please stay tuned.  I will mostly be using this blog so people can donate to the spay and neuter fund for our Thailand trip.  When I am there I will be blogging daily updates.

It's been a while since my last post when I left Taiji.  I have since travelled to Australia and have been volunteering with Sea Shepherd Conservation Society in Sydney and now Hobart.   Working with Sea Shepherd has been one of the most physically demanding jobs of my life, taking care of an old ship is a constant never ending job.  We just spent 5 days at sea and I saw many dolphins where they should be, free and safe from Japanese dolphin killers.  I don't know how you could see these beautiful animals playing with their families in the open ocean and intend to cause harm.
I have also decided I am going to change the name of my blog because my new adventures are not just with cetaceans.  I am now going to be raising the funds to spay and neuter dogs or cats in Thailand with the organization Soi Dogs out of Phuket.  In the next couple month I will be working and fundraising in Australia so I can travel to Thailand in May 2012. 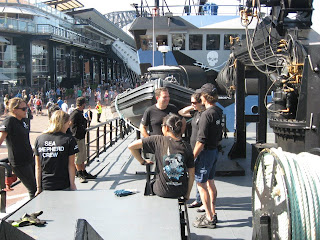 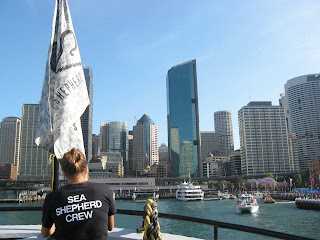 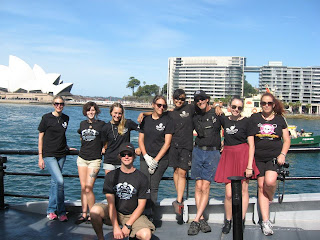 Any suggestions for a new blog name?

The dolphin meat and offal you see in these pictures came from dolphins who were alive an hour earlier.  The meat is probably still warm.  We followed the trucks leaving the slaughterhouse to where the meat is hacked up into smaller pieces for sale.  The fishermen were not happy about me taking these pictures, one physically assaulted me and tried to push me away from the truck, the other crashed his truck into a wall trying to escape my camera.
The dolphin killing scumbags of Taiji need to know we will not be intimidated, we will not back down.  What they are doing is a crime whether their government recognizes it or not and we will continue to document what they are doing so the world won't forget the dolphins of Japan.

We are no longer in Taiji, but we are still calling and emailing the embassy every single day.  Please do the same. 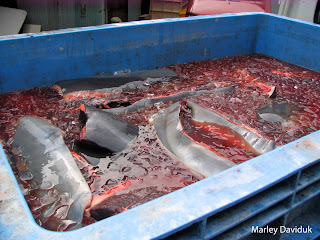 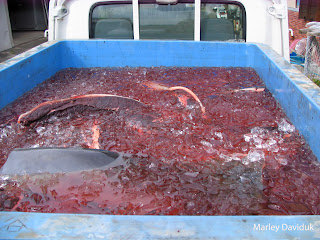 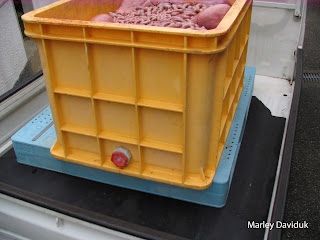 Video of the bloody slaughter on Tuesday

Video courtesy of Tia Butt, Save Japan's Dolphins
Posted by Vancouver Animal Defense League at 1:51 AM No comments: 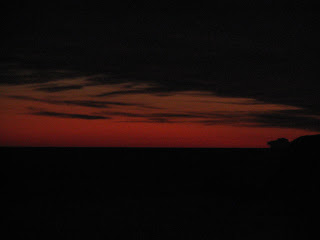 The day started with an eery bloody sunrise. 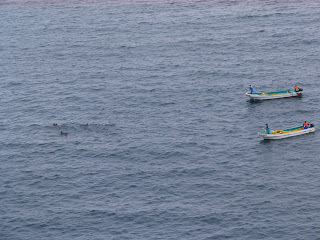 These scumbags in small skiffs were helping the banger boats by shouting at the dolphins and throwing things in their direction to scare them toward the Cove. 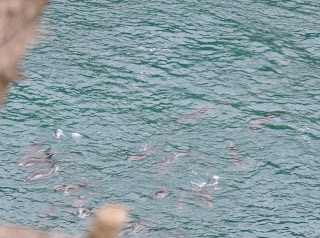 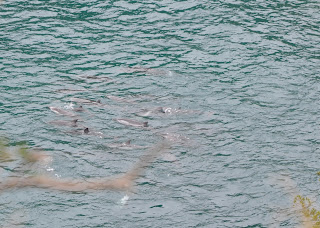 All of these animals met a violent, painful death in the Cove today. 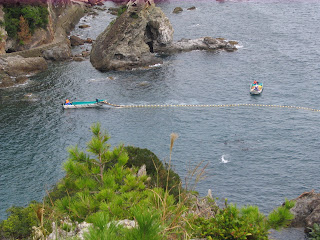 No chance of escaping once the Cove is secured. 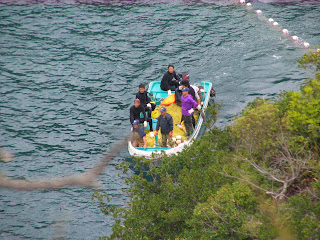 This is what animal abusers look like, no better than child molesters and rapists.  Absolute filth, heading into the Cove to kill the pod. 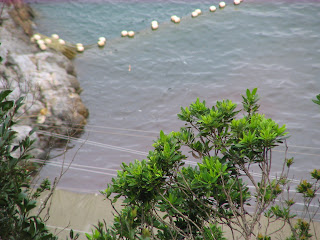 Blood oozing out of the Cove.  I will never forget what it felt like to witness this atrocity.
Posted by Vancouver Animal Defense League at 4:20 AM No comments:

Blood spilled on our last day in Taiji

Today we witnessed the most violent, cruel, worst thing we have ever seen.  Approximately 30 Bottlenose dolphins were murdered in the Cove today.

The day started at 5:30am with all the banger boats leaving the harbor and the harpoon ship staying behind.   At approx 8:15 we spotted the boats driving in a pod of dolphins.  It took them several hours to drive the dolphins in and we watched them fight for their lives, they were thrashing and fighting, three times they refused to enter the Cove and attempted to escape.  There were 5 banger boats dealing with these dolphins and the rest of the boats were attempting to drive in the rest of the pod which eventually escaped.

The banger boats were pounding away on their hideous poles creating a terrible sound that was driving the dolphins into a frenzy.  We saw baby dolphins flying completely out of the water attempting to escape the terrible sound.  As they were driven into the cove small skiffs came in with nets and roped the area off trapping the animals.  They were fighting against the nets and the boats as if they knew what was going to happen to them.  I witnessed one dolphin jump out of the water onto the rocks smashing his face causing blood to gush out of his mouth and nose, he fell back into the water and that was the last I saw of him.  Several dolphins broke loose and divers quickly grabbed them and dragged them back into the nets and under the tarps.

The Cove is now covered entirely with tarps so we can only see boats entering and exiting.  Right away we saw a boat head in and come out with a live dolphin that they obviously picked out to sell to a dolphinarium.  The dolphin was sitting on the bottom of the boat and they were pouring water over him.

After the boats left was when we started hearing the thrashing of the tails pounding against the water.  This sound is etched into my brain and I will never forget it.  The dolphins were thrashing as the dolphin killers were plunging knives into their bodies and then the blood started to ooze out of the Cove.  The thrashing went on for 10 minutes at least and we could hear the men yelling and laughing, clearly struggling to hold onto the animals who were fighting for their lives.

I became physically ill at what I saw, I could not contain my emotions.  Behind us there was an undercover police officer laughing with a Japanese man wearing a Yushin Maru hat.  The Yushin Maru is one of Japan's notorious whale harpoon vessels.  Clearly they thought this was entertaining.

The dolphin killers took two and a half skiffs full of dead dolphins to the slaughterhouse where they were loaded and gutted under tarps.  Since last year they have sufficiently covered up every visible area with tarps so none of this process is visible.

As the day ended we watched all the dolphin killing scumbags leave with a bag of dolphin meat to take home to their families.  Even the smarmy, rude, cranky police officer that follows us around in an unmarked car went in to the slaughterhouse and brought out a bag of meat for himself.  Hows that for bribery?

After everything we saw today, and reviewing our footage there were between 25-30 dolphins murdered today. It will stay with us forever.  Both of us are very positive people, but it is INCREDIBLY difficult to remain calm or positive in a situation like that.  Japan will forever be stained with blood for us.

Out last day here was the hardest day by far! We have both made the commitment to send an email or call the embassy EVERYDAY! I hope you do too.

Marley and Carisa
Posted by Vancouver Animal Defense League at 3:58 AM No comments:

Today the dolphin hunters left the harbor to hunt and came back with nothing, AGAIN.  We are so lucky to have been in Japan for almost 2 weeks and still the murderers have not spilled blood in front of us.

Today was intense like yesterday because they did actually locate the pod and attempted to drive them in towards the Cove.  The 12 banger boats spent hours zig zagging on the horizon getting into formation and surging full speed towards us obviously driving a pod.  We would then see them stop and sit there, clearly they lost sight of the pod and usually one boat will move around until they locate them again and they would get back into formation.  When they are in formation they all line up perfectly spaced apart so they can create a wall of sound to drive the animals forward.  We knew they were struggling to keep control of the pod and we were cheering the dolphins and begging them to fight for their lives.  Finally the filthy molesters limped back after spending so much money on fuel, we love it!

In the afternoon we went to the Taiji Whale Museum and watched the trainers working with the captive animals there.  I can't tell you how hard it is to watch them train these dolphins, it makes me sick to my stomach.  One of the Pacific White Sided dolphins I nick named Peanut was being forced to jump out of the water onto the cement platform which was about 2 feet above water level.  The trainer wanted him to jump out, lie there and hold his tail in the air and take a fish, but once the trick is done he has to slide off the edge back into the water.  It was clear that the sharp edge of the pool hurt his stomach and after around 7 tries he couldn't do it anymore and the trainer kept holding the fish above him.  To see him struggling so much to do this stupid trick made me want to vomit.  It was clearly hurting him and the poor hungry dolphin wanted his food.  Many people don't realize that these animals are kept hungry so they will comply.

We then watched these scumbags bring out all these needles and tubes and I guess one of the bottlenose dolphins is sick?  We actually watched them put 2 feet of tubing down this dolphins throat and tube some sort of substance into this stomach and they flipped him over and jammed a needle into his tail and pumped him full of some other unknown substance.

We realize more than ever that aquariums and dolphinariums need to be shut down!

For the Oceans,
Marley and Carisa
Posted by Vancouver Animal Defense League at 2:11 AM No comments: